Edinson Cavani and Anthony Martial struck late goals as Manchester United claimed a scrappy 2-0 victory over Everton at a bitterly cold Goodison Park on Wednesday to set up a League Cup semi-final with rivals Manchester City.

United wasted numerous opportunities in the opening stages and at times the play was dire from both sides as the game appeared to be heading for penalties before Cavani collected the ball on the right wing, skipped inside onto his left foot and fired past Everton goalkeeper Robin Olsen.

Martial added a second with virtually the last kick of the game as the visitors now meet City for a place in the April 25 final, while Championship side Brentford take on Tottenham Hotspur in the other last-four clash. 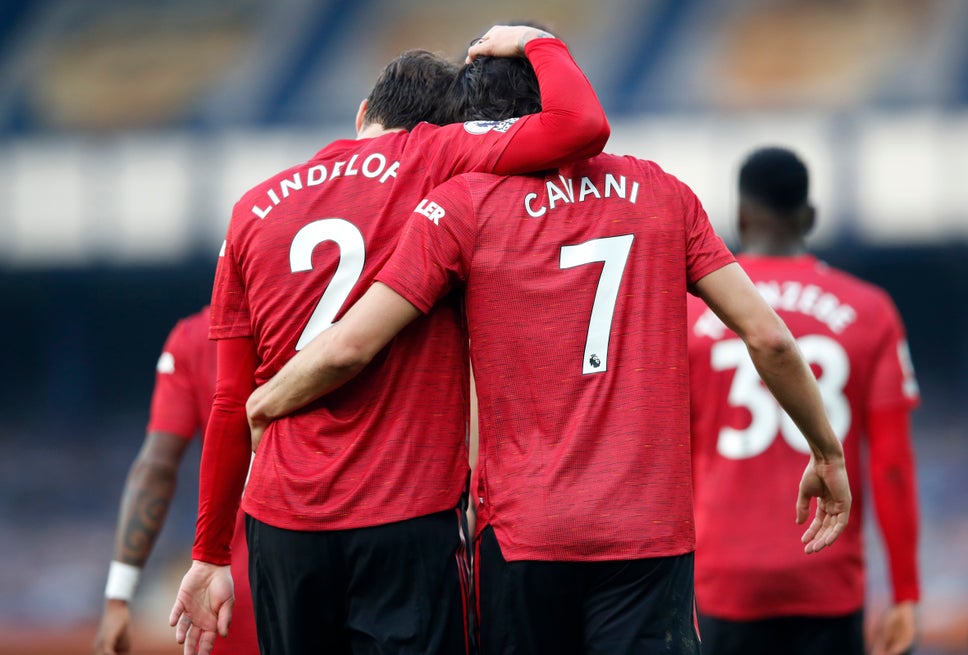 “It was an excellent performance and we should have been out of sight, we had three or four great chances. We need to be more clinical,” United captain Harry Maguire told Sky Sports

“We are expected to win trophies. It’s important to reach these big games but we have to start winning them and lift some trophies for this club.

Everton will feel aggrieved that the influential Cavani was still on the pitch after receiving only a verbal warning from referee Bobby Madley when he shoved Yerry Mina to the ground with his hands close to the Everton defender’s throat in an off-the-ball incident in the first half.

But with the Video Assistant Referee (VAR) absent in this competition until the semi-final stage, there was no further action taken when replays showed Cavani was lucky to escape sanction.

His quality proved the difference in opening up the tight Everton defence though, with Martial’s insurance goal coming in the dying seconds as the home side pushed bodies forward in search of an equaliser.

United keep up their excellent record away from Old Trafford and are now unbeaten in 20 domestic games in all competitions, winning 18 of those.

The visitors dominated the early exchanges and put Everton under pressure with a succession of chances that were wasted, Cavani coming close twice.

Everton finally woke from their slumber as, roared on by 2,000 fans in Goodison Park, Dominic Calvert-Lewin and Gylfi Sigurdsson both had efforts on goal that needed saving by United keeper Dean Henderson.

The second half had little of the spark of the first, both sides misplacing passes in the attacking third and neither keeper having a serious save to make until Olsen was picking the ball out of his net for Cavani’s opener.

Tottenham Hotspur reached the semi-finals of the League Cup with a 3-1 win over second-tier side Stoke City on Wednesday thanks to goals from Gareth Bale, Ben Davies and Harry Kane.

On the sort of freezing night that Stoke’s stadium became famous for when in the Premier League, Spurs boss Jose Mourinho paid the now-Championship team the compliment of fielding a strong side from the off including goal-machine Kane.

Chasing a first major trophy since winning the League Cup in 2008, the Premier League team totally dominated the first half at the Bet365 stadium, taking a deserved lead when Gareth Bale flicked in a cute 22nd minute header from a Harry Winks cross.

Stoke brought scowls to Mourinho’s face in the second half with a shock equaliser by Jordan Thompson, who beat Hugo Lloris from close after Jacob Brown’s pass in the 53rd minute.

Tottenham restored their lead with a fine low shot from outside the area by Ben Davies in the 70th minute – before Kane, inevitably – blasted into the top of the net from close range in the 81st minute.

Spurs were top of the Premier League earlier this month but they have dropped to sixth after collecting only a point from their last three matches.

Mourinho, who considers the League Cup as a great opportunity for silverware, has won it four times with other clubs.