Fifth win in a row in all competitions for Real Madrid as they moved back up to second, separated from Atletico only by an inferior goal difference although crucially their city rivals have two games in hand.

Real Madrid forward Karim Benzema kept up his impressive run of form by scoring and providing two assists in a 3-1 win away to Eibar on Sunday, taking the champions level on points with La Liga leaders Atletico Madrid. 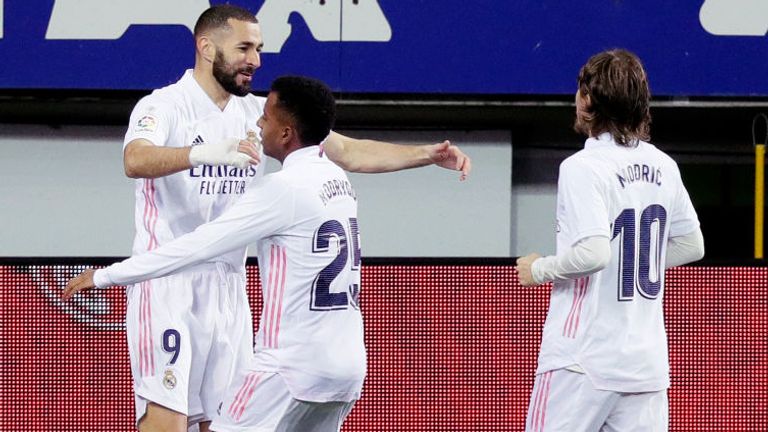 Real looked to be cruising after moving into a two-goal lead inside the opening quarter of an hour thanks to two of their veteran players finding the target, but Kike Garcia’s sumptuous 28th-minute strike halved the deficit.

Japanese midfielder Takashi Inui struck wide for the hosts after a mistake from Sergio Ramos on the edge of Real’s box, but Lucas Vazquez’s goal on the counter in added-on time ensured the visitors collected all three points.

It was a fifth win in a row in all competitions for Real as they moved back up to second, separated from Atletico only by an inferior goal difference although crucially their city rivals have two games in hand.

This was not a vintage display from Real as Eibar spurned several opportunities to level, having stumbled out of the blocks, but Zinedine Zidane’s side did enough to claim the spoils.

They took the lead following their first real opening, Benzema’s fifth-minute finish owing to an inch-perfect chip over the top from Rodrygo after the Brazilian had cut in from the left.

Benzema expertly controlled the ball with his right foot then found a way through the onrushing Eibar goalkeeper Marko Dmitrovic with his left to put Real ahead.

They doubled their lead with only 13 minutes gone when Kevin Rodrigues was pickpocketed on the left byline. Benzema turned provider, pulling the ball back to the edge of the area before Modric rifled into the roof of the net.

Benzema headed wide while an offside Rodrygo was denied by an acrobatic save from Dmitrovic as Real continued to turn the screw but Eibar then got a foothold into the game following a superb goal from Kike.

There looked to be little danger when Kike collected the ball 25 yards from goal but he turned and then produced an effort which curled into the top corner, out of reach of Thibaut Courtois’ outstretched hand.

Benzema was denied his second of the night by the video assistant referee, which ruled the Frenchman had strayed offside before finding the back of the net.

The reigning champions ended the first half on top but they were almost caught out just before the hour, Ramos inadvertently teeing up Inui after a sloppy pass. But Inui was unable to take advantage as he directed his effort wide of the goal.

Real forward Marco Asensio clattered the frame of the goal with his free-kick as he almost made an instant impression after coming off the bench.

As the game entered into the closing stages, there were some signs of nerves but Real were able to breathe a sigh of relief when Vazquez restored their two-goal advantage in the second minute of injury time.

Real turned defence into attack with lightning efficiency and Benzema was on hand to provide the assist for Vazquez, who made no mistake after being put through.​​​​ 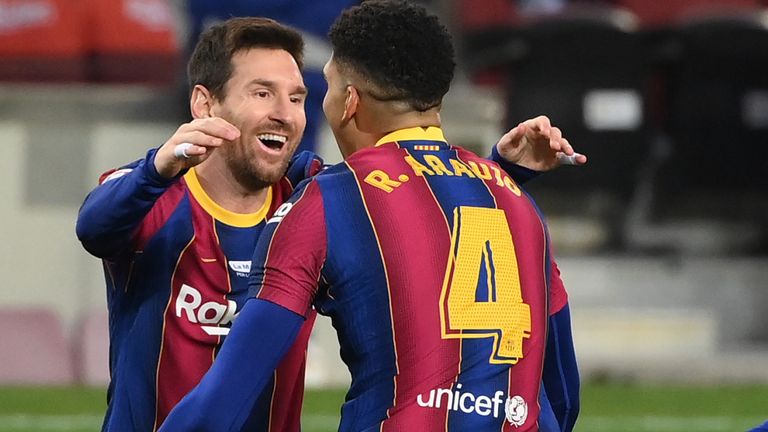 Lionel Messi equalled Pele’s record of 643 goals for a single club after scoring for Barcelona in a 2-2 draw with Valencia on Saturday.

The Argentina forward netted a milestone goal with a diving header just before half-time – moments after missing a penalty – to cancel out Mouctar Diakhaby’s 29th-minute opener.

Barcelona then went ahead through Ronald Araujo but Maxi Gomez earned Valencia a point.

Messi went close with several late efforts but Ronald Koeman’s side failed to find a winner and his star player had to settle for matching rather than surpassing Pele’s Santos mark for now.

Barcelona are languishing fifth in the top-flight table but could yet be overhauled by sixth-placed Sevilla who have two games in hand on the Catalan giants.

Messi levels with Pele in numbers

But although the Argentina stalwart fluffed his lines he was still able to ride out that blow, quickly converting Jordi Alba’s deflected cross as the ball stayed alive after his missed spot-kick.

Barcelona thought they were on course for victory when Araujo’s acrobatics seized a 2-1 advantage with little more than half an hour to play.

But then up popped Gomez to seal the draw, heaping yet more misery on Barcelona and Koeman – and taking the shine off Messi’s latest landmark day.

Suarez at the double for Atletico

Uruguay striker Suarez, who recently had a spell on the sidelines after contracting coronavirus, gave Atletico the lead in the 41st minute as he got the slightest touch on a low cross from Kieran Trippier to score for the first time since early November.

Suarez then slid in to knock home another from a delightful low pass by Yannick Carrasco in the 58th minute for his ninth goal of the season, taking him joint top of the scoring charts alongside Celta Vigo’s Iago Aspas and Real Sociedad’s Mikel Oyarzabal.

Elche got back into the game with a header from Lucas Boye in the 64th minute following a well-worked corner routine, becoming the first side to score against Atletico at the Wanda Metropolitano since the first game of the season.

Boye nearly found an equaliser when he swivelled to shoot inside the box but Atletico ‘keeper Jan Oblak got across to tip the ball around the near post.

The hosts soon sealed the points, though, when substitute Diego Costa went to ground to earn a debatable penalty and then lashed home from the spot in the 80th minute.

Elche’s 40-year-old striker Nino then came off the bench to try and help his side get something from the game and almost scored but saw his header cleared off the line.

Real Sociedad were beaten for the second game in succession by Levante, falling 2-1 to Jorge de Frutos’ late winner.

Alexander Isak put the San Sebastian side ahead midway through the first half but Roger Marti levelled shortly before the half-hour mark.

De Frutos’ late winner then lifted Levante up to 14th and out of the relegation zone courtesy of a second win from three games.

Villarreal cemented fourth place with a comfortable 3-1 win at bottom side Osasuna, who ended with 10 men.

Gerard Moreno fired the visitors ahead after seven minutes, before Fernando Nino doubled the lead on the half-hour – by which point Aridane Umpierrez had already been sent off for Osasuna.

Roberto Torres reduced the arrears from the penalty spot with 20 minutes to go but, as they pressed for an equaliser, Moreno struck again with four minutes to go.