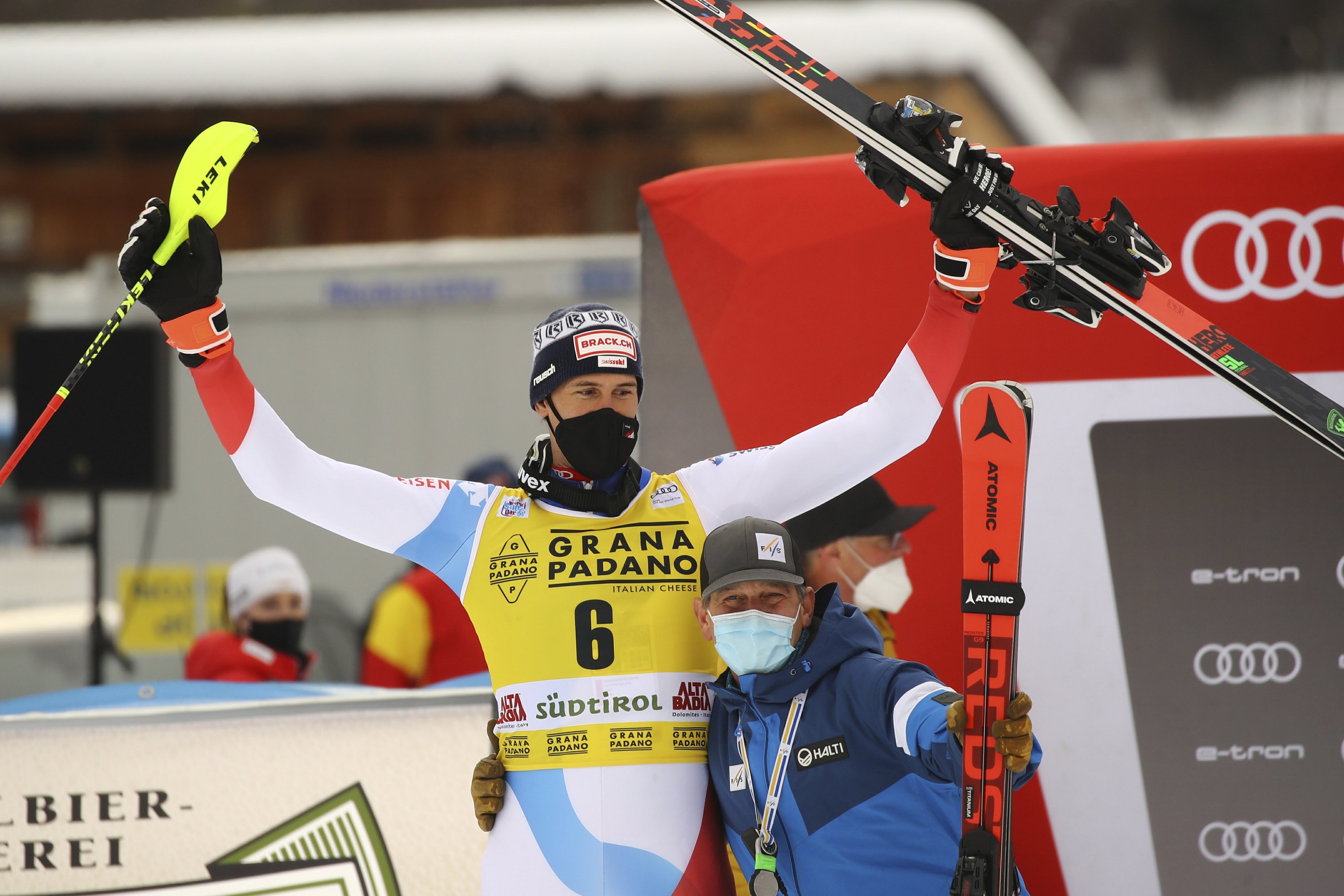 Towering Swiss Roman Zenhauesern roared from eighth after the first run to victory in the first men’s slalom of the World Cup ski season on Monday in Italy.
Competing in his first race of the season, Zenhaeusern claimed his second win in the discipline and fourth overall, clocking 1 minute 45.43 seconds in Alta Badia.

Manuel Feller was just eight hundredths off in second place, up from 13th. And fellow-Austrian Marco Schwarz climbed from 10th to complete the podium in third, another four hundredths back. “It was so tight after the first run I knew I had to push,” Zenhaeusern said. “I was extremely nervous because I had no race in 11 months.” First-run leader Alex Vinatzer meanwhile faded to fourth in his home country, and World Cup leader Alexis Pinturault of France placed 11th.

Zenhaeusern’s result was the latest statement from the Swiss team which has had a skier on the podium in nine of the 10 men’s events contested so far. Another men’s slalom in Italy is scheduled for Tuesday, under floodlights in Madonna di Campiglio.

American striker Morgan ends loan spell at Spurs to return to the U.S. United States international and twice World Cup winner Alex Morgan has ended her loan spell at Tottenham Hotspur and will return to the U.S., the Women’s Super League (WSL) club said on Monday.

Morgan joined the north London club from Orlando Pride in a bid to regain match fitness following the birth of her child in May after the COVID-19 pandemic truncated the National Women’s Soccer League season this year.

The 31-year-old’s signing was seen as a coup for Spurs but the striker, who has scored 107 international goals, only made five appearances and scored twice in the WSL where the club sit eighth out of 12 teams in the standings.

“I will be forever grateful to the club, my team mates and Spurs supporters for taking such good care of me and my family,” Morgan said.

“From the moment I arrived in London, I realised I was part of a first-class organisation, one that helped provide me the opportunity to immerse myself back into the game I love.”

Spurs have struggled in the WSL this season, however, and the club sacked co-head coaches Karen Hills and Juan Amoros last month when they were second-bottom, with Rehanne Skinner taking over.

The club then earned their first wins of the season, with Morgan scoring both her goals under the former England assistant manager.

Morgan’s last appearance came in a 3-1 win over Aston Villa on Dec. 13 when she scored the opener from the penalty spot.

Mikel Arteta believes a lack of confidence is the hurdle his shot-shy Arsenal side cannot clear as they continue to slide down the Premier League table.

The 13-time English champions are 15th in the table, just four points clear of the bottom three, and winless in seven league games after their latest defeat to Everton.

Arteta believes Arsenal have the fighters to turn their season around, but “some of them can doubt in any moment”.

The lack of a goal threat has been of particular concern, with the Gunners dominating matches but struggling to create or convert chances.

Arsenal have netted just 12 times in the league – of which two have been penalties – and rank 17th for goals scored.

They have forged a relatively modest 21 big chances, from which they would be expected to score, which puts Arteta’s men in a tie for 14th in the top flight.

Even when Arsenal are getting shots in on goal, they score with a meagre 8.2 per cent of their efforts – better only than Sheffield United, Burnley, Wolves, Fulham and West Brom.

By these crucial metrics, Arsenal are right where they should be: looking over their shoulders towards a relegation battle.

It is a sharp decline Arteta could scarcely have anticipated, with Arsenal trailing only champions Liverpool in terms of shot conversion last term (13.8 per cent) and leading the way in 2018-19 (15.3 per cent).

“I think it’s confidence-related,” Arteta said. “When you are in that [confident] mood, when you shoot, the ball goes in the net.

“When it’s not happening, you are overthinking or sometimes it’s bad luck. It’s moments you have to go through. It’s difficult to explain.

“What has been sustaining the team in the past few seasons as well is the conversion rate being much higher than what it was supposed to be.

“Now it’s much lower. That’s a big gap and a lot of points at the end.

“We need to completely change that straight away and try to find ways to score goals even when the opportunities are not that clear.”

It should come as no surprise then that technical director Edu has openly targeted “a player with creativity in the middle” in the upcoming transfer window, although reported target Dominik Szoboszlai – who played 14 key passes across six Champions League matches – has joined RB Leipzig from Salzburg.

“Edu is dealing with that at the moment. I am focused with all the games. We don’t have time to expend energy on that, because it’s very clear what we want to do.”

Nicolas Pepe was supposed to be the man to drive Arsenal forward, yet he has laid on only two chances from 10 Premier League appearances and has seen his attitude called into question.

“He is hurting, he is suffering, believe me,” said Arteta, hurtling from one issue to the next as he passes a year in charge at Emirates Stadium, their FA Cup success swiftly forgotten.

“[Life president] Ken Friar has been here longer than anybody – I think 70 years,” he added.

“But the results now in the Premier League are taking the gloss off what we have done, for sure. We have to accept that. There is a negativity around the team, because that is what happens.”

Chelsea 3-0 West Ham: Battling Blues back on track at the Bridge

Tammy Abraham struck twice as patient Chelsea ground out a 3-0 win at home to West Ham to stop the rot in their final Premier League match before Christmas.

Talk of a title challenge from Frank Lampard’s side had been stifled by consecutive defeats to Everton and Wolves, slipping out of the top four while champions Liverpool pulled clear.

But victory on Monday moved the Blues back up to fifth after Abraham settled nerves at Stamford Bridge with a clinching pair in the 78th and 80th minutes.

Chelsea had endured a long night after Thiago Silva nodded them into a 10th-minute lead, with West Ham – after a double against their London rivals last term – on the front foot but unable to forge a legal opening.