The Bahrain GP, live on Sky Sports F1 at 2.10pm with build-up from 12.30pm, is the first of three consecutive races to finish the season and has all the ingredients to be a cracker.

The Sakhir circuit, where F1 has raced since 2004 and under floodlights since 2014, always seems to encourage wheel-to-wheel battles – there were 76 overtakes during last year’s race – and those may be at the sharp-end of the grid today with Mercedes expecting Red Bull to be a threat. 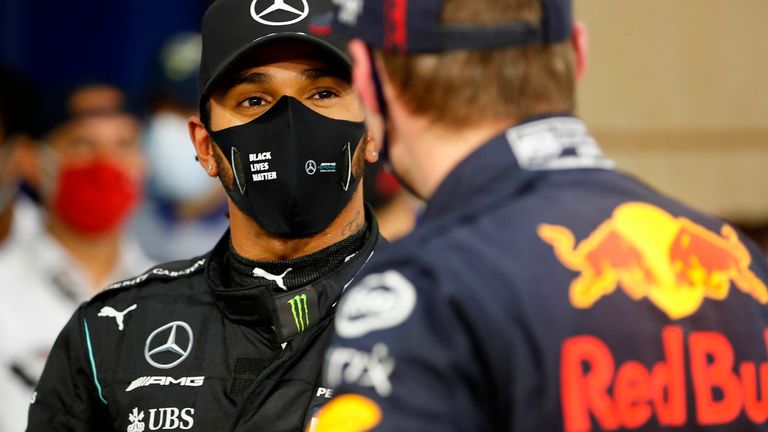 Red Bull’s Verstappen, the only driver to have beaten newly-crowned seven-time F1 champion Hamilton in a session this weekend, starts third – where two of the last three races in the desert have been won from.

For these final three races of the season, we are fortunate to not have the pressure on us anymore but that does not mean we can take the foot off the gas. Tomorrow will be a battle as always and I wouldn’t want it any other way. pic.twitter.com/lriNOODj7X

“The Red Bulls and Max have been incredibly fast this weekend, as we’ve seen through practice,” said Hamilton, who is aiming for his 11th win of the season and has spoken of letting loose with the title pressure off.

There is the added intrigue of strategy unknowns, with a one-stop race – which has been common in F1 2020 – not thought to be possible due to the Bahrain heat and tyre degradation.

Pierre Gasly (eighth on the grid), meanwhile, admitted: “I think it’s going to be quite an unusual race in terms of strategy. I think we’re going to see some different things.”

Perez heads the midfield fight, although Daniel Ricciardo and Esteban Ocon are intent on chasing him down both for personal pride and for Renault’s hopes of leapfrogging Racing Point and McLaren for third.