MANCHESTER, England — Ole Gunnar Solskjaer said before the Carabao Cup semifinal with Manchester City there could be “no excuses” if Manchester United did not reach the first final of his reign, and he is right. The 2-0 defeat at Old Trafford will feel a huge missed opportunity for the Norwegian, who knows how important it is to lift his first trophy as manager. The wait goes on.

United kicked off with a full-strength team and on a run of form that has seen them reach the top of the Premier League table. City, meanwhile, were without key players including first-choice goalkeeper Ederson and a recognised centre-forward, yet it was Pep Guardiola’s team who were able to reach their fourth successive Carabao Cup final. It is now 1,533 days since they lost a tie in this competition — here against Jose Mourinho’s United in October 2016.

For Solskjaer’s United, it is a fourth straight semifinal exit after losing three last season. He will not want his team to become perennial nearly men, even if there is noticeable progress from when United lost to City in the Carabao Cup semifinals a year ago. 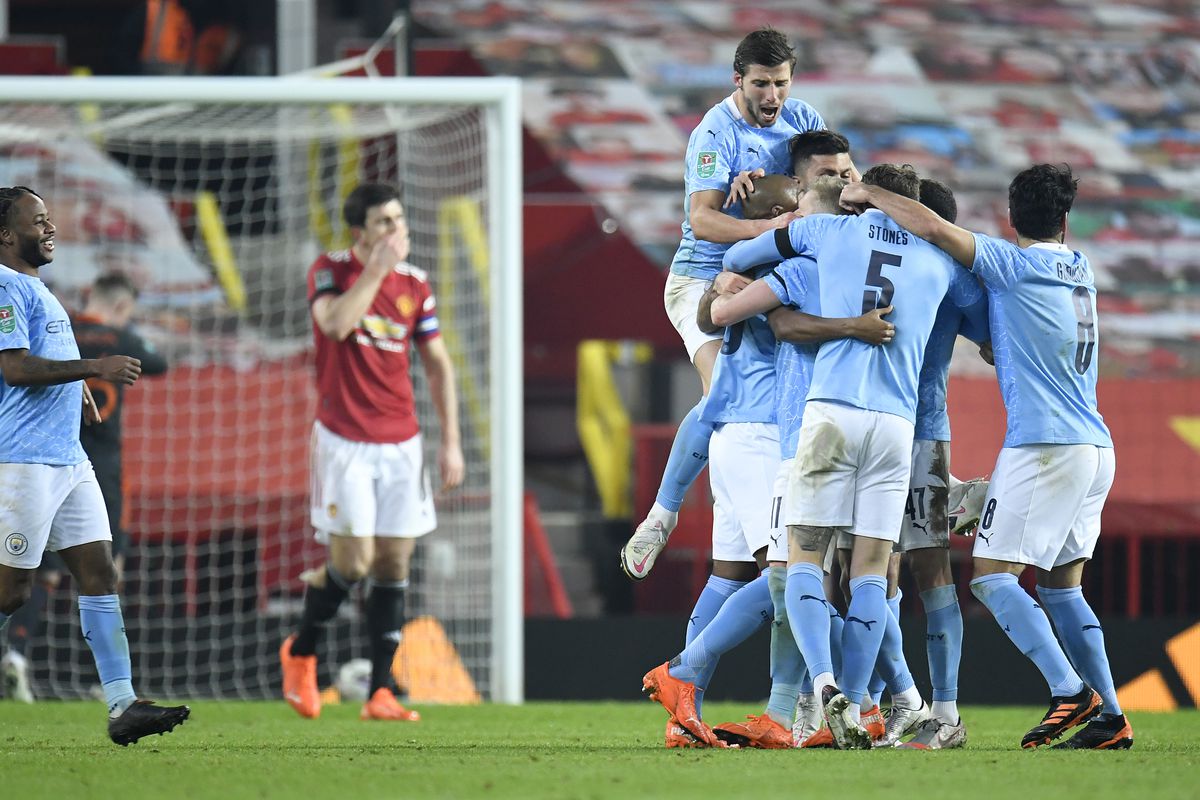 “We played against a very good Manchester City team, they played well,” said Solskjaer afterward. “When they play well you have to play very well to beat them. We were just lacking that little bit.

“We’re getting closer. This is a much better version of United than a year ago in those semis. It’s not psychological [losing in four semifinals]. Sometimes you meet good teams in the semis. We met, at the moment, City are probably the best team in England.”

There can be no arguments about the result.

City’s stand-in keeper Zack Steffen was called on to make one significant save from Bruno Fernandes in the eighth minute, but otherwise the United States international had a front-row seat to a slick performance from the visitors. Ilkay Gundogan and Phil Foden both had goals ruled out for offside inside 25 minutes, and in between Kevin De Bruyne thundered a shot off the inside of Dean Henderson’s post.

Even after John Stones had bundled in his first goal since the 2018 World Cup to give City the lead in the second half, Henderson needed to make two fine saves — one throwing himself towards the top corner to keep out Riyad Mahrez — to keep United interested. Fernandinho ended that seven minutes from time with a shot that skidded into the corner from 20 yards.

On a freezing night in Manchester, it was a cold reality check for United ahead of a crucial week for their budding title challenge with trips to Burnley and Liverpool.

For City, the past week has been a timely reminder of their quality. They have had their training ground closed because of a coronavirus outbreak and their numbers depleted, but in the past four days have still managed comprehensive victories at Stamford Bridge and Old Trafford. Guardiola said this week he expects the best teams to find more consistency during the second half of the season, and City appear to be clicking into gear just at the right time.

“The team is ready and it was an outstanding performance,” said Guardiola, who dedicated the result to City legend Colin Bell, who died on Tuesday. “We dipped a little bit in the second half, we were tired after the game at Stamford Bridge, but when the team has this mentality they can do something incredible. It’s not the Champions League, but four times in a row to reach the final, I’m so impressed.

“It’s about the consistency. We didn’t have a proper preseason and that’s why we need a little bit of time, but I think we are already there.”

In contrast, United conceded two sloppy goals, both of which came from set pieces.